MSF has provided medical assistance in the country since 1992. In the last years, MSF has had projects and emergency interventions in several provinces, including Bujumbura, Cibitoke, Rumonge, Bujumbura, Muyinga, and Ruyigi. In Bujumbura, MSF has been providing surgical care and consultations for patients with trauma in the Arche Kigobe trauma centre. In June 2019, Burundi experienced a major cholera outbreak, with cases rising to more than 1,000. In an effort to curb an unprecedented epidemic, MSF built and supported four treatment facilities in Bujumbura, Cibitoke and Rumonge provinces, trained public health staff and contributed to awareness-raising.

In 2019, the number of people who contracted malaria significantly rose in Burundi with nearly nine million cases noted between January and December. MSF launched a response to this outbreak in the province of Ruyigi in Kinyinya health district, one of the most severely affected in the country. In June 2019, MSF teams started supporting 14 health centres and two hospitals by providing free malaria treatment. While treating the patients helps to save lives, it was not enough to tackle the problem at the source.

It was time to think about how to prevent tiny mosquitoes from transmitting the disease to a sizeable chunk of population. In September 2019, MSF supported the Ministry of Health in the setting up of a first round of indoor residual spraying (IRS) campaign. This technique involves spraying individual houses with insecticide to kill off mosquitoes. In one month, the MSF teams sprayed 59,731 homes, protecting close to 287,000 inhabitants for a period estimated up to nine months.

Spraying at a household level against malaria-carrying mosquitoes

For the IRS campaign to be effective, it needs to be repeated. In this case, the spraying of the houses in the area would be done every year over the course of three years. That leads to renewing the protection of the households, and lowering the number of malaria-transmitting mosquitoes in the community. A Missing Maps activation had helped to obtain a base map with updated buildings based on recent satellite imagery with help of volunteers before the 1st round of IRS. Once data were available on openstreetmap, the experts in Geographic Information Systems (GIS) and Internet and Communication Technologies (ICT) uploaded the in mobile phones and computers to prepare the IRS Data Collection strategy.

To carry out the second round of the IRS campaign meant to mobilize local authorities and the community, both in the sense of ensuring a sufficient capacity of those to implement it, but also in terms of ensuring the cooperation of the population to open their houses and respect the Covid-19 precautions. With the global pandemic, it has been difficult for international organizations to conduct trainings as usual. It was challenging for MSF to organize the travel of the international staff and find a safe way to train more than 1,000 people during the preparation phase. The MSF campaign was delayed by a few weeks due to COVID-19 restrictions, while other organizations simply had to cancel theirs.

Overall, 468 sprayers and 330 community health workers were dispatched in the hills to prepare and conduct the campaign. Luckily, over 80% were field workers involved in the first round of the IRS campaign in 2019, so it was possible to do the training over the course of three weeks. Close to 100 local staff were trained in mobile data collection in OSMand and Kobo applications. During the campaign, building information was updated in the mobile mapping applications directly by the team leaders to monitor the progress and compiled always at the end of the day by the GIS expert. 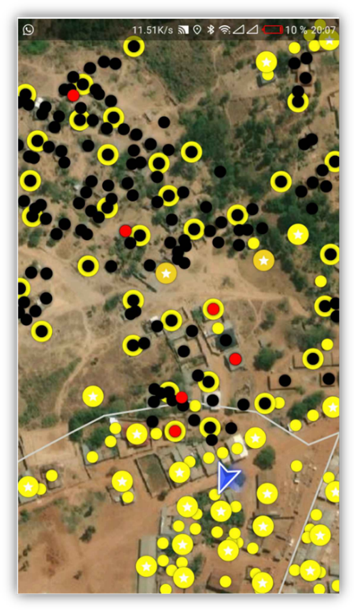 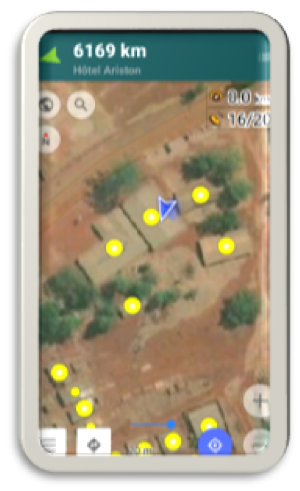 What a team leader sees on the mobile screen: Black dots are houses sprayed, yellow yet to be sprayed and red – spraying refused or not possible.

Apart from the adaptation to the pandemic context, the challenges included also a poor internet connection in one the communes, the accessibility of some households, and a tight timeframe to finish the campaign before the rainy season. Some houses are tough to access even by a bicycle and the dwellings in the more remote areas are spread far apart, while the spraying equipment is relatively heavy and voluminous. Before spraying, everything has to be carried outside of the house, and the residents would not accept that if it was raining. In addition, in its first year, the campaign achieved a very good coverage, which became also a challenge. The GIS Superviser commented, „if we did 96% last year (…) we had to do better than what we did last time.“ The aim was also high quality, with the spraying done according to the WatSan recommendations, while having the best coverage possible.

According to the GIS Superviser, it was better for the spraying teams to start far and gradually move in to closer points. If it rained, the accessibility over unpaved roads would be harder, so the teams would rather go to a closer location. Another lesson learned since the beginning of the IRS intervention is to cross-check the coverage of the households on several sources of information, not only the mobile screen and PC at different levels of the organization, but also with the community, for example by calling the village chief.

Even though the second year included new houses, the 2020 campaign succeeded to have a higher coverage than the first year: 311,500 people protected in the three communes (97% of total population), with 98% of the houses sprayed. Thankfully, a tangible impact with a more than 85% reduction of malaria cases in the district following the 2019 intervention made the MSF team usually welcome by the local people. These good results led to the interest of the National Programme to learn from the MSF experience and best practices. The experience shows that the desired results may be reached, but require a complex planning, logistics and considerable human resources including the training and a multi-year implementation with use of the Geographic Information Systems.